Out of the euro – but where to? 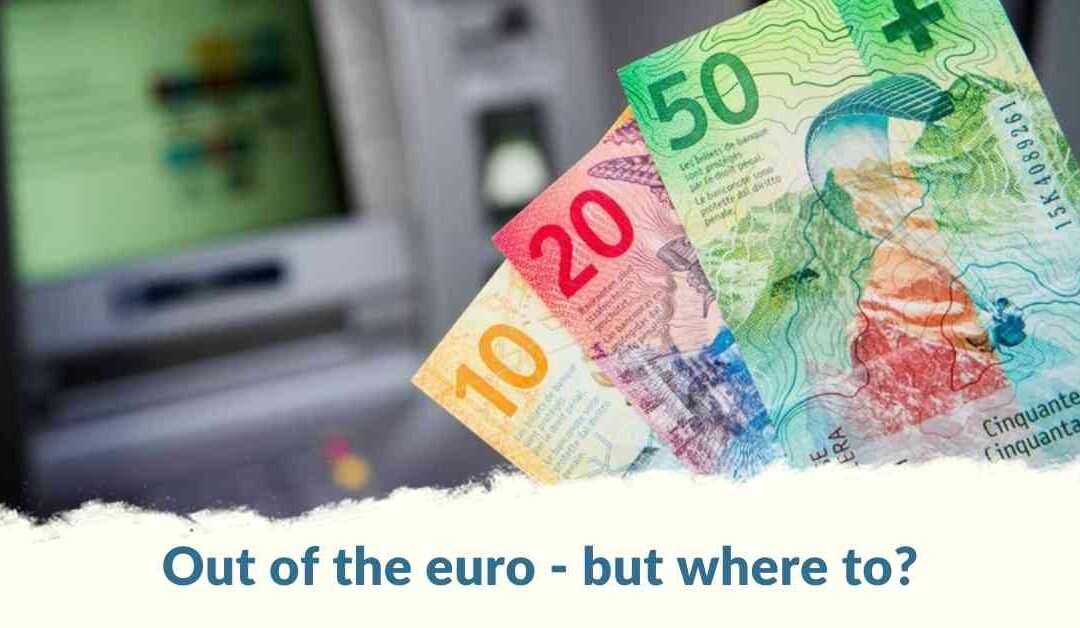 Sharply rising inflation, soaring national debt, the threat of tax increases, joint liability for EU debts, possible bank collapse.
Many people in Germany are unsure how to protect their savings and assets against currency devaluation and attempts by the state to expropriate them.
For many investors and savers, the motto is therefore „Get out of the euro!
But where to?
Into inscrutable cryptocurrencies?
Into precious metals that are difficult to transport and store?
Into other currencies?
For many investors, cryptocurrencies are still a black hole. Lack of understanding of the mechanisms of action, concerns about government intervention, high volatility of prices and the fear of a total loss still make conservative investors hesitate.
Despite some favorable factors, gold and silver are not (yet) developing as clearly upwards as has been predicted for some time. Interested precious metal friends make a bow around the advertised gold „securities“, know about the dangers of these in case of emergency worthless promises of payment. Also more and more states threaten with regulations and interventions up to expropriations. In addition, there are challenges with regard to safe storage.
Many world currencies, such as the U.S. dollar and the British pound, the Norwegian krone or the Japanese jen, are struggling with similar problems as the euro.
Could the Swiss franc be a safe and stable alternative to the euro?
„Currently, one euro is worth only 1.03 Swiss francs. In March 2021, the exchange rate was still quoted at 1.11 francs per euro – this corresponds to an appreciation of the Swiss currency by almost seven percent in less than a year.“
So states the renowned HANDELSBLATT in its online edition of 27.01.2022.
To put it another way. If an investor had purchased Swiss francs for €100,000 in March 2021, he would be able to enjoy a significant increase in the value of his assets not even a year later.
And he would still be able to sleep peacefully without worrying about currency devaluation. Because.
„Admittedly, the inflation rate in Switzerland has also picked up. However, at around 1.5 percent, it is well below the level of five percent in the euro zone.“ HANDELSBLATT continues.
„The stable currency thus contributes to the fact that the Swiss National Bank SNB is likely to achieve its inflation target of zero to two percent in the coming years as well. Therefore, according to experts, the franc appreciation is also welcome by the central bank.“
In the medium term, experts even expect currency parity between the Swiss franc and the euro. And this for many years to come.
Over the last 150 years, Switzerland has proven to be a safe haven for assets from all over the world. While Europe went down several times in wars and crises during the same period, generations were deprived not only of their lives but especially of their fortunes, Switzerland proved to be the ideal environment. Despite various attempts by foreign interests to weaken Switzerland as a location.
Favorable conditions continue to prevail for entrepreneurs and the self-employed in Switzerland. The Swiss economy is robust. The social system is exemplary. The security situation and legal certainty offer the greatest possible security for investors and residents.
Money is a shy deer and seeks refuge in quiet surroundings.
Especially in times of crisis such as the current ones, and especially with rising inflation and an uncertain economic future.
For more information, please contact us. www.lebwoduwillst.com
(Photo credit: dpa; the complete article from HANDELSBLATT can be found here: http://bitly.ws/oewf)